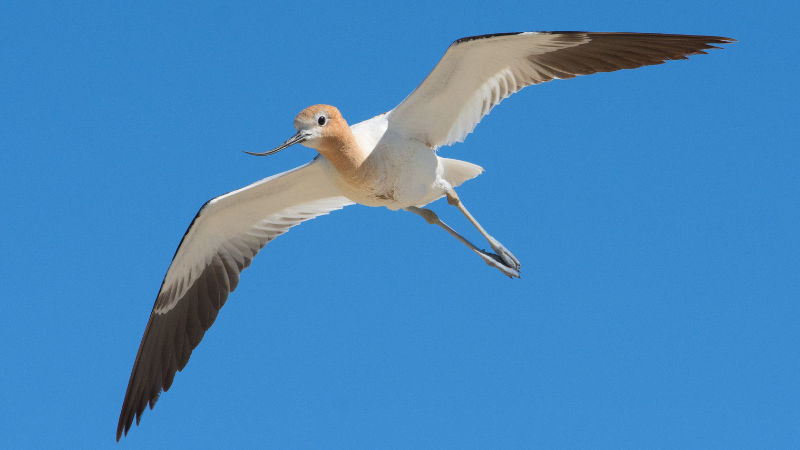 As Oregon’s only hypersaline lake and one of just three such lakes in the western U.S., Lake Abert is a vital ecosystem within the high desert and an essential stop for migratory birds travelling along the Pacific Flyway from Patagonia to Alaska.

At it’s full capacity, Lake Abert covers 64 square miles below the iconic Abert Rim. When conditions are optimal in this delicate ecosystem, Lake Abert can support hundreds of thousands of birds whose arrival at the lake coincides with peak brine shrimp and alkali fly populations.

Join us as we kick off the 2023 High Desert Speaker Series with a captivating virtual presentation on Lake Abert and its birdlife. Presenters Ron Larson and John Reuland will cover the natural history of Lake Abert followed by a deep dive into the many bird species that depend on the lake. ONDA’s Conservation Coordinator Anne White will delve into the steps it will take to ensure the lake is provided the water it needs to thrive.

Birders, photographers, and naturalists alike will enjoy this visually detailed presentation as our speakers will use their avian photographs to illuminate the special ecosystem of Lake Abert. And, stay tuned, as the High Desert Speaker Series will continue with events in Bend and Portland in March and April.

Registration has closed for this event. Keep an eye out for a recording after the event. Ron Larson has always loved being in and around water. Growing up along the Oregon coast, Ron dreamed of becoming a marine biologist. After completing a PhD in marine sciences in Canada, Ron used submersibles to study deep-sea animals off the Florida coast. His career with the U.S. Fish and Wildlife Service was focused on water development and endangered species, and his research interests include the ecology of waterbirds, especially rails and bitterns, and shorebirds.

At present, Ron is part of a group of scientists studying the effects of climate change on Great Basin lakes and serves on the boards of the Oregon Lakes Association and the Klamath Basin Audubon Society. John Reuland spent his youth in Minnesota, mostly outdoors – hiking, fishing, cross-country skiing, observing nature and becoming fascinated by all wildlife, including birds. He moved to the Pacific Northwest in his late 20s to add mountain climbing to his outdoor activities. Upon retiring, John began volunteering for Audubon Societies in both Arizona and Oregon, conducting a variety of bird surveys in both states.

In 2011, East Cascades Audubon started a program to monitor Lake Abert bird populations and John volunteered for three surveys that first year and has since done at least two every year, for more than 30 surveys in all. In 2014, John took over the volunteer coordination and data management for the project. John does not bring a scientific background to the Lake Abert studies, just a love of the outdoors, bird identification skills, and an understanding of how to collect and manage data. Anne White is ONDA’s Wildlands Coordinator. In this role, she is responsible for evaluating public lands conservation opportunities and challenges throughout southeastern Oregon. A third-generation Pacific Northwesterner, born and raised in northeastern Washington on the Columbia River, Anne moved to Central Oregon as a teen. Anne earned her bachelor’s degree in social science from Oregon State University-Cascades with an emphasis on community development and leadership and has amassed an extensive knowledge of desert ecology through her years of field work.

Thank you to First Interstate Bank for sponsoring the 2023 High Desert Speaker Series.