In Search of the
Elusive Long-nosed Snake

On August 19, 2018, ONDA shared this blog article about the possibility of Long-nosed Snakes in southeastern Oregon, requesting documenting photos of sightings which brought astonishingly quick results. To be exact, the very next day after that plea was posted! Herpetologist Alison Davis Rabosky emailed me several photo-vouchers showing a nice, big Long-nosed Snake she and her fellow herpetologist husband, Dan, found dead on the Owyhee Lake Road, July 1, 2010. They are professors at the University of Michigan, and until a colleague noticed my posting and passed it along to them, they were unaware that the species had never been verified in Oregon.

That was the only time Alison and Dan ever drove the road leading to the Owyhee Dam, but they got lucky and happened to be in the right place at the right time. Over the decades I frequently spent warm summer nights fruitlessly cruising the same route for a possible Long-nosed Snake crossing the pavement. As she commented about the irony of this, “So I guess you——and Carl Kauffeld——are totally right. People can stumble into state records because snakes are (at least sometimes) simply where someone happens to find them!”

Congratulations and much thanks to Alison and Dan for this significant contribution; and likewise my gratitude to ONDA for providing the venue allowing this to happen. A “new” species has now been added to Oregon’s list of native wildlife.

Hopefully, this will inspire other folks to continue keeping their eyes peeled and their cameras ready for Long-nosed Snakes in other parts of southeastern Oregon. There remain questions as to how far up the Owyhee drainage the species ranges? I have a couple reports for the nearby Succor Creek drainage that sound like possible long-nosed snake sightings. And are they also in Oregon’s arid Alvord Basin, where it has been documented nearby a mere 30 miles or so away across the Nevada line?

Thank you, and good luck!

If You See a Long-Nosed Snake in Southeastern Oregon …

With a twinkle in his eye, the famed herpetologist/author Carl Kauffeld once sagely opined, “Snakes are where you find them.” His ironic humor conveys a truth. Successfully locating an elusive specimen is often largely a matter of pure luck. Nevertheless, doing some advance learning about the habitat needs and behavior of a species can greatly facilitate being in the right place at the right time to achieve that goal. This is especially compounded in higher elevation desert environments where there are enormously contrasting swings of temperature difference between day and night.

Snakes are “cold-blooded” (ectothermic) reptiles that can’t self-regulate body temperature the way “warm-blooded” (endothermic) mammals and birds can. They must constantly move back and forth between sunshine and shade to maintain metabolic equilibrium. During the intense daytime heat of summer, many desert snakes remain in cool subterranean retreats, emerging at night after the air temperature has chilled down to a more moderate range of about 80 to 65 degrees. Consequently, few people ever see a number of interesting kinds of nocturnal snakes native to Oregon’s high desert country.

Even professional herpetologists actively studying reptiles often have difficulty finding certain species that comprise this slithering night-crew. One example is the secretive Long-nosed Snake (Rhinocheilus lecontei), which has beautiful alternating crossbands of orangish-red, black, and speckled creamy-white. Although somewhat resembling a venomous coral snake (which isn’t native to the Northwest), the Long-nosed Snake is totally harmless, usually not attempting to bite when handled. As the name implies, it has an elongated, pointy snout that’s utilized for burrowing to find lizards sleeping buried in sand at night. Additionally, it dines on mice, insects, other small snakes, and also reptile eggs likewise found during its burrowing activities. Adults average about 20 to 30 inches, with occasional individuals growing to slightly more than a yard in length.

Although primarily a species of the American Southwest, Long-nosed Snakes have also been documented in the deserts of northern Nevada and Utah, along with the lower Snake River Valley of southwestern Idaho. There has been anticipation for decades that someone will eventually verify it in adjacent southeastern Oregon — most likely the Owyhee River drainage.

Indeed, over the past fifty years I have personally expended countless dark hours prowling sandy basins with a flashlight in far-flung parts of the Owyhee Canyonlands and Alvord Desert. So far, though, nobody has been lucky enough to at long last confirm the species in our state. One tried-and-true method employed by field herpers is slowly driving roads on warm summer nights when snakes are on the move. For several hours after the sun goes down, a paved road-surface will retain warmth, often causing a crossing snake to linger and comfortably toast its tummy. Some nights when conditions are favorable (especially after a summer thundershower refreshes the parched landscape), this road-cruising technique can yield valuable records for seldom-seen snake species in previously undocumented localities. However, the remote Owyhee contains only two relatively short sections of paved road to help improve the odds for encountering a Long-nosed Snake.

With plans for a future updated edition of my field guide, “Reptiles of the Northwest” (Lone Pine Publishing, 2002), I’m gathering fresh info. In a new version of the book, I’d love to eliminate the southeast Oregon question-mark on the Long-nosed Snake’s range map. ONDA’s ongoing efforts to generate greater interest and protection for the Owyhee Canyonlands have led to more people hiking in this region … increasing the chance that someone will come across a Long-nosed Snake.

A favor to ask While in southeastern Oregon, if you spot what looks to be that colorfully cross-banded snake (shown above), please snap several photo-vouchers and alert me. If your camera offers a function to embed GPS coordinates and date into the image, that would substantially improve validation. The collective help of multiple sets of eyes would be greatly appreciated!

If you are successful,  I’ll give you credit for documenting the first Long-nosed Snake in Oregon in the new edition of my book — plus, the gift of a signed/personalized copy. To send locality data and photos, my email address is highdesertal47@gmail.com.

Thanks, and happy trails! 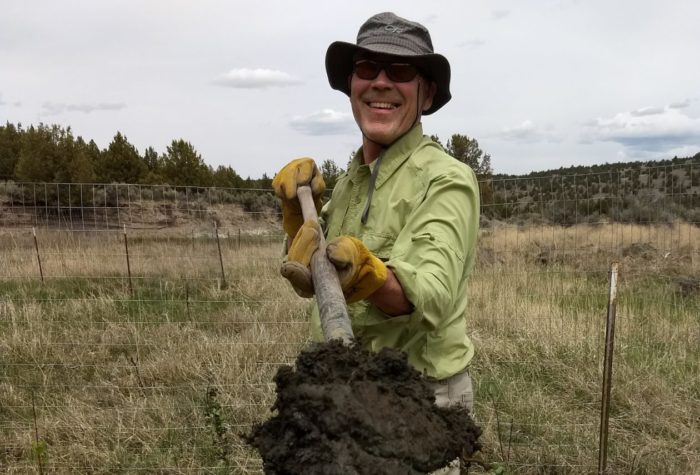 Native Oregonian, Alan D. St. John, lives in sage-scented juniper woodlands near Bend with his wife, Jan. Al is a freelance interpretive naturalist who uses writing, photography and drawings to teach about the natural world. Specializing in herpetology, he has worked as a reptile keeper at Portland's zoological park, and conducted extensive reptile and amphibian field surveys for the Oregon Department of Fish and Wildlife, USDA Forest Service, the U. S. Department of the Interior's Bureau of Land Management, and the National Park Service. Along with authoring the books, Reptiles of the Northwest and Oregon's Dry Side: Exploring East of the Cascade Crest, his work has appeared in National Geographic, Outdoor Photographer, Ranger Rick, Natural History, Country, Nature Conservancy, The New York Times, and other periodicals.