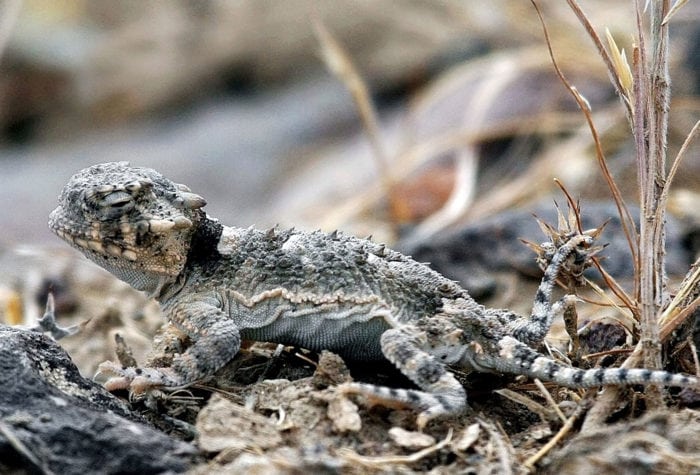 My week-long volunteer circuit around the Ochoco Mountains included a two-day work camp sponsored by Oregon Natural Desert Association. Circling the Ochocos clockwise, I stopped often to marvel at the incongruity of a desert river and found the gravel turnoff at a milepost somewhere East-or-West-of-the-Hinterlands. The last 4.5 miles was a 30-minute crawl over hills, gullies and range land between high rocky buttes. Fearing I was lost, at last I saw the tents and cars of my fellow volunteers, and joined the encampment.

Seventeen of us met on a Thursday evening at this crackling dry, juniper-studded field along the South Fork Crooked River. After dinner, we had a fireless (due to a statewide burn ban) “fireside chat” about the next two days of work, then hustled under a billion stars to warm sleeping bags as the temperature plummeted. Jefferson Jacobs, the ONDA staffer who led this trip, is known among ONDA volunteers for fireside discussions, where he shares his considerable knowledge of the high desert region, its history, peoples and ecosystems. His story-telling reputation is what prompted me to sign up for this trip, and the stories were as delightful as predicted.

By 6:00 a.m. the next morning, Jefferson had brewed us the most delicious coffee I ever tasted. I suspect he has learned that this is the only way to entice people out of warm sleeping bags on a 15˚ morning. I also suspect that the temperature had something to do with how good the coffee tasted. Caffeinated and breakfasted, we gathered at eight with shovels, work gloves, bag lunches and water bottles, and hiked a quarter-mile through frosty fields to the day’s work site in a grassy meadow by the river.

ONDA groups who preceded us earlier in the summer had prepped the area in two ways: First, they had built several welded wire-mesh fenced enclosures that were approximately 20’ to 30’ square. These enclosures are called, exclosures, in restoration volunteer lingo because excluding deer and beaver is the only way to keep the young plants from being browsed to the ground in the critical first years while they get established.

And, on another trip they built two beaver dam analogs, also known as BDAs, one-half mile apart. These obstructions across the river made of logs with intertwined willow twigs slow the flow and raise the adjacent floodplain water table, in this case, by two feet. The BDA will give this patchwork of creekside plantings a fighting chance of surviving the hot Oregon desert summers.

Jefferson had lined up some 2,300 native riparian saplings and shrubs for this crew to get in the ground: cottonwood, aspen, willow, alder, red-twig dogwood, elderberry, spirea, currant and meadow wildflowers. We planted half at each of two BDA locations. The second day a group of young recruits in their 20’s and 30’s turbo-boosted the effort by lowering the average age of our group significantly. We called them the Riders of Rohan, from the epic scene in the Two Towers (Tolkien’s Ring Trilogy)—a team-building mythology instigated by Jefferson.

In one of our fireless chats, we learned why we were working in this particular place. This 3-mile stretch of the South Fork Crooked River is on a 1,200-acre parcel owned by Otto Keller, who is keen on land conservation and restoration. He collaborates with ONDA and other partners to restore the South Fork Crooked River to some of its former ecological diversity. Together, they have successfully removed several acres of juniper and repaired fences to prevent cattle trespass (a significant issue, especially when one tries to find un-grazed land to study the effects of grazing on ecosystems). The partnership is now knee-deep in riparian restoration—with hopes of bringing back habitat to support native denizens such as trout, salmon and beaver. Oregon once teemed with beaver, but trappers nearly eliminated them from their natural range throughout central Oregon. In 20 years, when these plantings have grown, it is hoped that they will provide the elements beavers need to build dams, and what fish need for shelter and spawning.

Jefferson was confident that this ragtag band of conservationists, ranging in age from 25 to 80 could get 2,300 plants tucked into the ground in two 8-hour days. This was hard work, yet many of these folks keep coming back year after year to plant more sections of the meandering floodplain, and to check up on last year’s babies. Camaraderie buoyed this crew of shovel-wielding hole-diggers (2,300 holes is a lot of digging) and trowel-bearing plant setters, and by dam—we did it!