As the flowers bloom and the days grow long, hikers who had spent months and years preparing for their thru-hikes: quitting jobs, ending leases, selling off furniture, are now canceling their flights or heading off-trail. ONDA, the Pacific Crest Trail Association, Appalachian Trail Conservancy, and Continental Divide Trail Coalition have all issued statements telling hikers to postpone their 2020 hikes to slow the spread of COVID-19.

As the U.S. State Department, the CDC and WHO recommend self-isolation and no nonessential travel, the country and the world are going into self-quarantine, shutting down restaurants, schools, and any large gatherings. Governor Brown issued a stay at home order for the state of Oregon as of March 23, 2020, in addition to shutting down all dine-in restaurants and gatherings of 25 or more, as well as banning all camping in state parks and forests. Eastern Oregon, where the ODT passes through, is especially vulnerable to the impact of this pandemic.

From Gov. Brown: “If we can slow the transmission and flatten the curve in Eastern Oregon, it will be a very good thing because we have very limited hospital capacity there. And the other piece is, honestly we don’t have the personnel that we will need for a huge surge.”

In short, it is clear for any hikers planning to thru- or section hike the Oregon Desert Trail this year that they need to stay home.

I understand the heartbreak of postponed plans. My bedroom is currently covered in half-filled resupply boxes for my southbound Continental Divide Trail hike planned for this summer, and as I scrolled through news updates this past week, it became clear that my hike was going to be postponed until next summer unless the restrictions lifted sometime in the next three months. As I watched fellow hikers grieve for their thru-hiking plans, I remember my own remorse when historic late spring snow forced me off the Oregon Desert Trail last June.

From my journal the day before I bailed:

I hiked along the broad ridge, the massive Oregon Canyon slowly coming into view to the north, the desert of Nevada spreading out below the cliff to the south, thousands of feet below. The sun was starting to sink, casting a sharp golden light over the landscape. It was beautiful, but it broke my heart all over again. Tonight was my last night on this route.

To the east, the Owyhee River was flush with water from late spring storms and snowmelt, flooding the canyons as it flowed south. The long, twisting canyon that was said to be one of the highlights of this route could be avoided by walking above on the sagebrush flats for a hundred miles, but no alternate or reroute could avoid the inevitable crossing of the Owyhee.

And so, it was time to end this route, to save those last 150 miles for a drier season. I was ready to be done with this route, but I desperately wished I could finish. Paradoxes upon paradoxes, unable to ever be truly satisfied, and always left wanting more.

When you have to give up on your hike due to outside elements, that loss of control is absolutely humbling. But it’s also, at the end of the day, really the essence of long-distance hiking. You can spend years pouring over maps and trip reports, researching gear and resupply towns, ensuring no stone is left unturned. But there is always an element of chaos, a blizzard or raging river … or global pandemic … that can wipe all that preparation away with a blink of an eye. And when that happens, you have a decision to make:

The answer is no. The desert will be there next year. Until then, wash your hands, and stay at home. 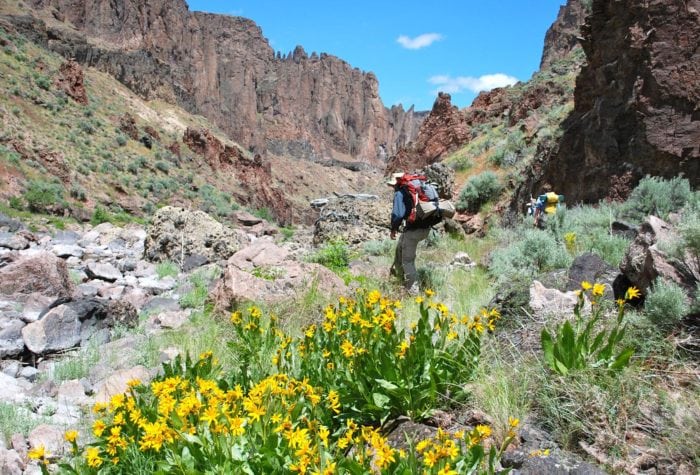 Riley (they/them) is a trans, long-distance hiker who is currently living in Seattle, Washington with their two cats. They have hiked over 3,000 miles, including the PCT and ODT. When they aren’t hiking, you can find them reading queer sci-fi/fantasy, researching high routes, and petting other people’s dogs. Riley wrote and published a zine about their 2019 hike on the Oregon Desert Trail, and is donating a portion of zine sales proceeds to ONDA. Order your copy today by emailing Riley, or by contacting them on Instagram.

You can follow their Instagram @rileyhikes for photos and updates from their latest adventure, and read more of their writing at rileyonroute.wordpress.com.

Please use Caution on that Oregon Desert Trail Adventure

ONDA’s Wild Desert Calendar is chock full of desert beauty, and, each year around this time, we hear from members who simply can’t bear to just throw last year’s calendar […]