This year, the Oregon Department of Fish and Wildlife reported a small increase in the statewide sage-grouse population, but on the whole, the Oregon population remains 40 percent below 2003 baseline estimates. Sage-grouse require large tracts of intact sagebrush to survive, and ONDA is engaged in several partnerships and planning efforts to protect and restore critical sage-grouse habitat.

Anderson Crossing is at the start of Section 21 of the ODT. This can be accessed by high clearance vehicles (high water years may make the trip impossible as you […]

On your way to the top of Steens Mountain Summit trailhead, you’ll pass by two amazing viewpoints that involve short walks—Kiger Gorge and the East Rim—and we recommend stopping at […]

Pronghorn are the fastest mammal in North America, having adapted to outrun the now-extinct American cheetah. Due to hunting and habitat loss, pronghorn almost followed the way of the American cheetah, declining to as few as 10,000 to 15,000 individuals across the country in the early 20th century. Through conservation efforts, pronghorn populations are rebounding, and they need further protective measures to keep up that trend. Oregon’s Greater Hart-Sheldon region is home to an important population of pronghorn, and ONDA is working with partners to promote the protection of this essential habitat.

There is no developed trail to the top, so the hike begins when you have found a decent spot to park your vehicle. Beatys Butte at 7,885 above sea level […]

At 4,700 feet tall, Sutton Mountain towers over the surrounding landscape. With a steep, craggy west side and a rolling, grassy eastern face, the mountain has a mysterious Jekyll and […]

While fish are perhaps the least obvious animal to be thought of in the desert, eastern Oregon is home to several threatened species of native fish, including Lahontan cutthroat trout, bull trout, Hutton tui chub and warner sucker. These fish are genetically distinct species that evolved in the isolated lakes and drainages of Oregon’s high desert, and these unique populations are in danger of blinking out of existence without our help. While federal resource management planning is important for conserving vitally important watersheds, ONDA is also advocating for the protection of hundreds of miles of desert waterways, including vital habitat for native fish species.

Learn More: Wild and Worth Protecting

Within an hour’s drive from Bend and just west of Terrebonne, the rugged canyons of Whychus-Deschutes remain astonishingly wild.

Drawn to the exhilarating rapids, remote canyons, and thriving fishery, more than 10,000 people float the 72-mile long Clarno to Cottonwood stretch of the Lower John Day River each year. Author: Joanna Zhang  |  Published: January 18, 2023 |  Category: Where-to Oregon’s high desert is teeming with a diversity of wildlife, including species that are found nowhere else on the […] 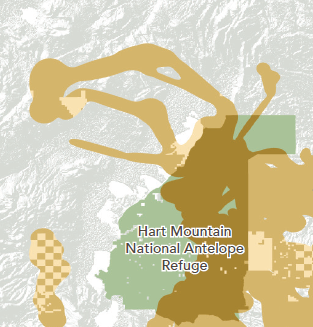 The Essential Pronghorn Corridor in the Greater Hart-Sheldon

The Greater Hart-Sheldon region straddles the Oregon-Nevada border and provides essential habitat for pronghorn, as well as hundreds of other sagebrush-dependent plants and animals. In 2016, the region supported more than […] Author: Joanna Zhang  |  Published: September 28, 2021  |  Category: Profiles “I guess I would describe myself as an urban dwelling nature lover, an advocate for native ecosystem conservation, and […] By Joanna Zhang on September 1, 2021 | Posted in: Uncategorized

Author: Joanna Zhang | Published: August 27, 2021 | Categories: Uncategorized Four Stories That Will Inspire You to Protect Oregon’s Rivers  Late summer is synonymous with days in and along […] Where-to: Have the Most Incredible Picnic in the Owyhee

Author: Joanna Zhang  |  Published: June 24, 2021  |  Category: Where-to Take your outdoor dining experience to the next level with one of these scenic picnic spots in the Owyhee […]